Various solar power design options are available to choose from, depending on your preferences andrequirements, including hybrid, grid-tied, bi-directional, and off-grid systems.

All these design systems have three major components – the battery, inverter, and solar PV modules (panels). Solar PV modules are the most visible portion of the solar power system, the panels that absorb the sunlight and convert it into electricity.

They differ widely according to size, quality, efficiency, and how much energy they can generate. 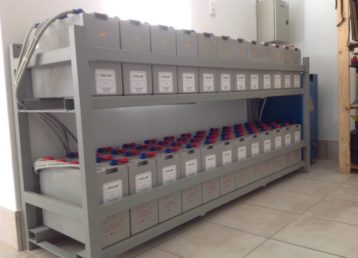 The battery stores power for use when solar energy is not available, either due to a power failure or when it is consumed faster than it is generated. There are many kinds of batteries on the market that differ in quality, efficacy, longevity, and cost; we will happily advise you of the optimal battery for your particular solar power system and individual needs. The batteries most commonly used in solar power systems are lead-acid, AGM gel, and lithium-ion batteries. However, at Osolar, we choose only the most advanced battery technologies and management systems. We offer only lithium-ion phosphate battery technologies in conjunction with proven Battery Management Systems (BMS), where we can remotely manage aspects of discharge and maintenance 24-7. The solar PV modules send the generated electricity to the inverter, which converts it from DC to AC power.

Three kinds of inverters are available, which vary according to size, output capacity, and functionality.

These are hybrid, grid-tied, and off-grid inverters.

If more electricity is being drawn than produced, solar power will be used up instantly; therefore, the delicate balance between production, storage, and consumption will be disrupted. At Osolar, we understand the fundamental importance of designing bespoke solar power systems to maintain this balance and cater to individual client needs.

The most commonly used solar systems are hybrid systems, which generate solar energy that supplies power and charges the battery, with Eskom as an additional power source. These systems facilitate reduced electricity costs while still ensuring a steady power supply, even during power failures, due to the back-up battery. Hybrid systems are appropriate for use in small to medium-sized homes and micro-business settings.

A hybrid system works as follows:

An off-grid system is one that is entirely separate to the Eskom grid and relies solely on sustainable energy; therefore, property owners who choose off-grid systems are generally:

Off-grid systems produce virtually no power at night and very little on grey and rainy days; therefore, they require more solar panels and a greater number of batteries to ensure reliability, generate a continuous flow of electricity, and avoid power dips or outages. Running off-grid systems in conjunction with generators and/or using them to recharge batteries will reduce the need for larger panels and battery capacity, thus decreasing the initial capital outlay.

Grid-tied systems are simple in design and work according to the following process.

The solar modules (panels) absorb sunlight and convert it into DC power, following which they send it to the inverter, which converts it into AC power and feeds it to the property’s electrical distribution board to be used onsite. Should excess solar energy be available that is not being absorbed by the load in the house, that can be fed back to the grid for credits on your municipal bill.

This creates a continuous supply of energy, with grid power and solar power utilised as needed. Grid-tied power will only be used if there is not enough solar power to meet the needs of the property. Consequently, the process is seamless and the occupants in the house are undisturbed by the switching between solar and grid power.

For example, if the solar power system is producing 80kW of power and electricity consumption is 100kW

If only 70kW of power is being used, however, only solar power will be used and no electricity taken from the grid. The surplus 10kW will be fed back into the grid.

Utilising Grid-Tied Systems in Your Home

You can build grid-tied systems into a premises in the design and construction phase, or add them at a later stage.

It is possibly to incorporate battery systems with grid-tied systems by using hybrid inverters to manage the charge and discharge of power from the batteries. Generally speaking, residential houses and new builds run on a single-phase, 230-volt, 63-Amp supply from the grid, although some older homes have a three-phase supply.

Grid-tied systems are available in Single Phase and Three Phase configurations. You can use them in conjunction with generators and Uninterrupted Power Supplies (UPSs).

Technology advanced solutions are offered for on and of-the-grid applications, making use of the latest and best technologies available in the green Environment. Our services offered are designed to help clients to promote the dimensions of environmental sustainability and the total cost of ownership.

This website uses cookies to improve your experience while you navigate through the website. Out of these, the cookies that are categorized as necessary are stored on your browser as they are essential for the working of basic functionalities of the website. We also use third-party cookies that help us analyze and understand how you use this website. These cookies will be stored in your browser only with your consent. You also have the option to opt-out of these cookies. But opting out of some of these cookies may affect your browsing experience.
Necessary Always Enabled
Necessary cookies are absolutely essential for the website to function properly. These cookies ensure basic functionalities and security features of the website, anonymously.
Functional
Functional cookies help to perform certain functionalities like sharing the content of the website on social media platforms, collect feedbacks, and other third-party features.
Performance
Performance cookies are used to understand and analyze the key performance indexes of the website which helps in delivering a better user experience for the visitors.
Analytics
Analytical cookies are used to understand how visitors interact with the website. These cookies help provide information on metrics the number of visitors, bounce rate, traffic source, etc.
Advertisement
Advertisement cookies are used to provide visitors with relevant ads and marketing campaigns. These cookies track visitors across websites and collect information to provide customized ads.
Others
Other uncategorized cookies are those that are being analyzed and have not been classified into a category as yet.
SAVE & ACCEPT